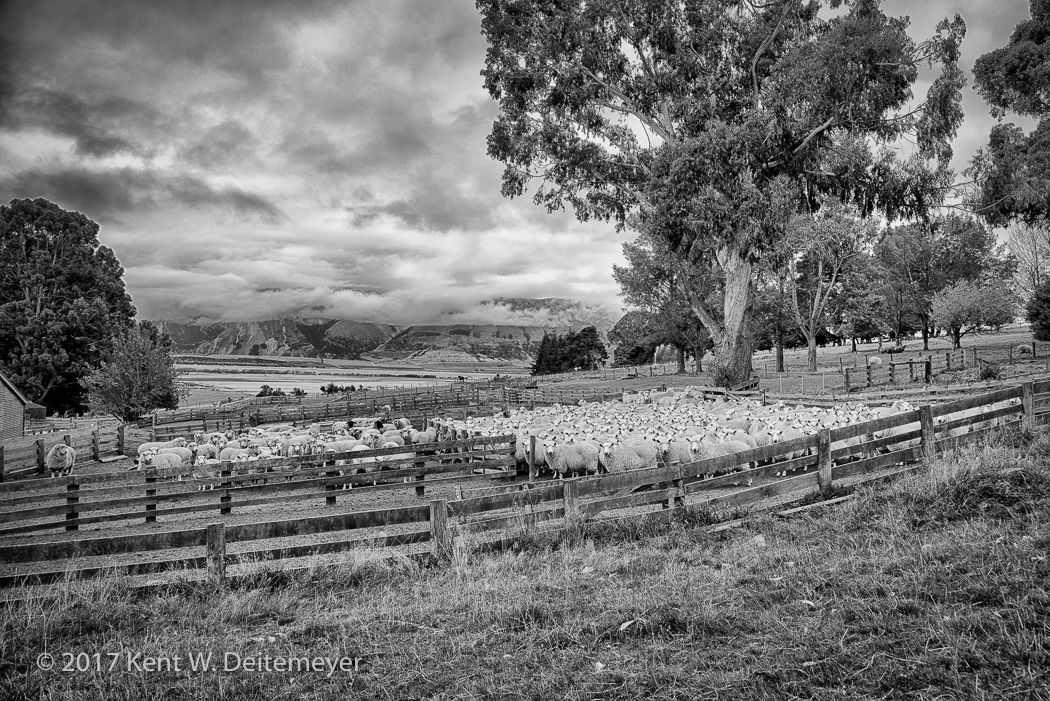 It is the early days of autumn in New Zealand and shearing day for 5000 Romney sheep at Glenariffe Station. When I arrived, BJ was busy doing the cooking in the kitchen and looking after their 10 month old daughter. BJ was keeping the shearing crew well fed with three meals and two tea breaks each day. Mark was kept busy with the dogs to keep the sheep moving into and out of the sheep yards so there is no hold up. And #1 son, Ben, was outside playing and looking after the working dogs with a bit of TLC when they were having their own break.

The shearing crew was down to their last day. The sheep yards were a busy place with sheep to be sheared and moved into the shearing shed. The sheared sheep are moved into holding pens to be released together and set off to the paddocks. In addition to the five shearers are three crew members that looked after moving the sheared wool off to the presser where the large wool bales are pressed and wrapped up.

The shearing crew works four two-hour shifts with a half-hour break between shifts. It is tough back-breaking work and the pace is next to a frenzy to get the job done. Imagine shearing 5000 critters!

Wool bales were pressed and packed up to be sent off from the loading dock to be sold at auction. Each bale weighs approximately 175 kgs and is labeled with the Glenariffe Station name. Romney wool is used in making carpets and of course is 100% New Zealand raised and being a completely natural and renewable resource.

In the morning, we drove up the Rakaia Gorge in a misty low cloud only to discover as we entered into the top end, the clouds were lifting, the dusty old road was dry and the sun came out in the afternoon as we headed back home.

The drive back down the gorge was interrupted with cattle and sheep mobs being moved from paddock to paddock. It was a fun day to stop off at Redcliffe Station owned by Willy and Sarah Ensor who are Mark's relatives. We watched and photographed Bill as he and his dogs managed to move the mob across the one-way bridge heading back to the station. A stunning afternoon in a magic valley.

A day of shearing sheep at Glenariffe Station, New Zealand

Mark Ensor and his top dog moving sheep into the wool shed for shearing.

The shearing crew at Glenariffe in full motion. I loved the music in the background!