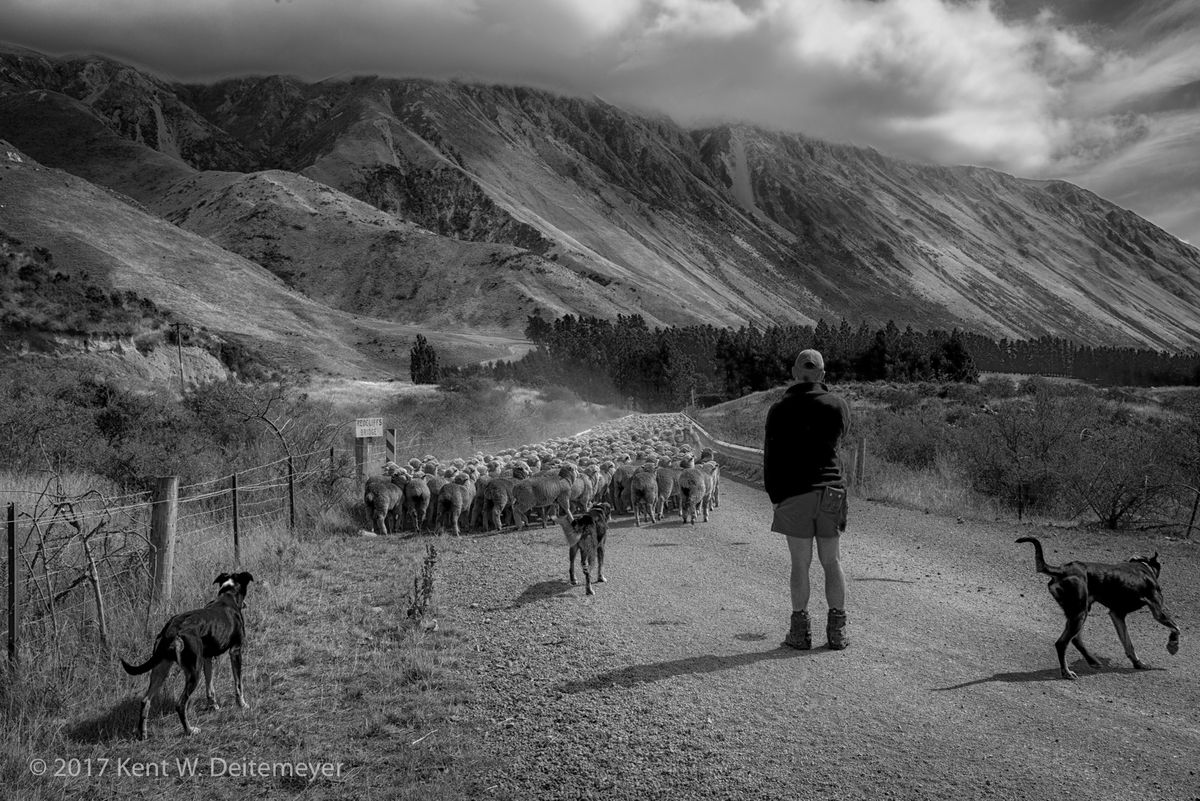 Several years ago, Kent had the good fortune of driving up Double Hill Road in the Rakaia River Gorge and meeting Willy Ensor of Redcliffs Station as he was moving his Merino flocks down the road across the one-way Redcliffs Bridge. Kent ended up making some photographs of Willy as they worked the sheep in the yards near the wool shed.

So, a few years later Kent and John are putting together the Stewards of the Heartlands project in New Zealand starting with Glenariffe Station in the Rakaia Gorge with Mark Ensor and BJ Bull. Mark was keen that our sustainable family farming project capture the tight-knit farming community in the gorge valley.

Video of images above illustrates our story.

Mark and BJ re-introduced Kent to Willy again as Mark is Willy’s second cousin. Willy and his spouse, Sarah, run the station with their shepherd, Billy Dowle, whom Kent also had met and photographed on another day as Billy was moving a sheep mob across the Redcliffs Bridge.

With a bit of serendipity, Willy invited Kent back to Redcliffs to photograph during the shearing time recently of their fine wool Merino flock and spend the day with them as they moved sheep to the wool shed for shearing and drenching them against parasites. The rest of the day was spent moving electric fence for the Angus cattle so they could access their winterfeed. A truck arrived from Ashburton delivering 11 large water tanks to be used to construct a major livestock water supply that will reach the grazing paddocks that Willy has developed.

Along with Willy’s little dog, Maggie, we jumped into the quad bike to head down to the paddock where the Angus were patiently waiting for Willy to move the electric fencing to allow them to access the winter fodder beets.

Afterwards, Kent jumped into the ute with Billy and his team of working dogs to bring a mob of Merinos down the road and into the shearing shed paddock. It was a perfect time to capture the iconic New Zealand scene of sheep being moved with the team of dogs keeping the critters organized and headed through the farm gate.

The station’s Merino flock is bred to produce fine wool measuring between 18 and 19 microns under contract with the New Zealand clothing company, Icebreaker. The station has been an Icebreaker grower for 20 years.

Kent was able photograph the hard working shearing gang and stayed out of their way as they sheared, graded and classed the wool and packed the bales for shipment to Icebreaker.

With lambing in a couple of weeks, we anticipate returning to photograph lambs gamboling around the paddock and hope to coincide with a second shearing session. The water supply project will be next on the agenda for the station.