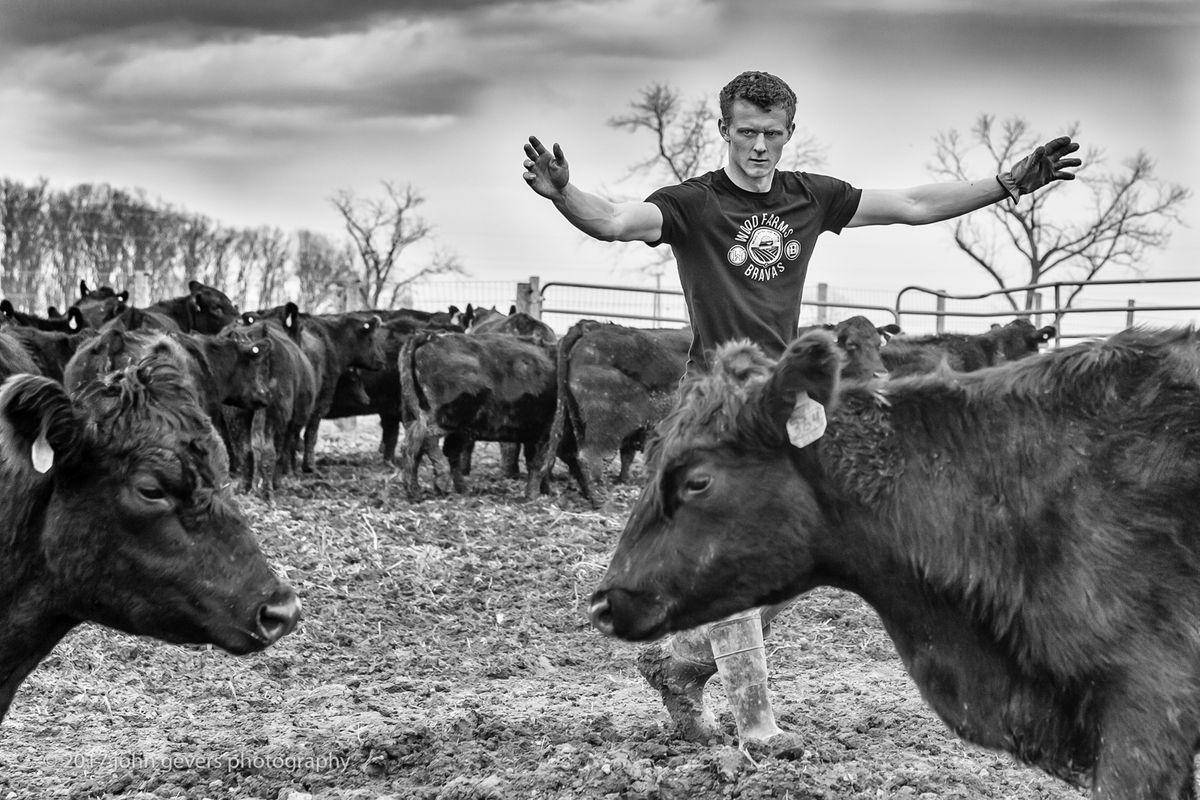 Late winter brings a scheduled pregnancy check among the cows at Wood Farms, Fort Wayne, Indiana. A breeding schedule is maintained to produce calves three times a year. This time, 60 eligible female cattle were tested for pregnancy, and 52 are carrying. That's an 87% pregnancy rate and one that makes farmers Dennis and Kristen Wood happy. They aim for 90% each time. Of this number, 42 out of 46 cows are carrying, and 10 out of 14 heifers are.

When a cow or heifer is not pregnant, it's referred to as being "open." During this check, one fraternal female twin was tested, and in keeping with genetics, she is not fertile and forever open. The term for this condition is called "freemartinism," and a "freemartin" is a sterile female calf that is the twin of a male calf whose hormones affected its development.

The veterinarian hired by the Woods is Dr. Cody Anspach from the Decatur Veterinarian Hospital. A recent graduate of Purdue University, Dr. Anspach uses an ultrasound device with a transducer that he inserts in each female to detect pregnancy and whether the calf(ves) will be delivered in May or September. The images from the transducer are conveyed to the goggles he wears on his head.

Dennis and Kristen, along with their farm hands Cathy, Dom, and Jack, ensure that the cows are treated with as much dignity and respect as possible given such a gynecological exam. The process is quite calm with the occasional obstinate cow showing reluctance to enter the chute that leads to the exam "room." Each exam lasts only minutes before she is released to rejoin the herd and resume grazing.

As Dr. Anspach calls out whether each cow or heifer is pregnant and whether it will be a May or September birth, Kristen writes down the exam result next to the cow or heifer's individual number as tagged to each animal's ear. The farmers will then know which to expect calves from in the months to come. Wood Farms keeps meticulous records on its Angus so ancestry of each animal is known back many generations.

Cattle raised outside and not confined to barns or raised on concrete slabs rarely develop medical issues, but sometimes during the preg check process, medical diagnoses are made. This time, two cases of pink eye are treated with an antibiotic injection. The Woods adhere to the ethical and humane treatment of livestock and believe in providing the animals in their care with antibiotics only when needed for the animals' well being. The two cows receiving the treatment will not carry the honor of being "antibiotic-free," and, consequently, will not be sold as such, but they still will not be carrying even an eighth as much antibiotic as some farms' cattle which are fed antibiotics as part of their daily diets to spur growth and keep infections at bay that are more common when cattle are confined.

As the preg checks finish, the proud dads of the soon-to-be-born are brought closer and fed Wood Farms organic hay, and the families reclaim their places in the paddocks. Natural order is quickly restored and nightfall brings tranquility and the promise of new life to Wood Farms.

Scrolling over the slideshow images below displays captions for each photograph.